The beginning of this adventure is published in my zine, Blah Blah Blah, v 17 is 5.

We left off camping at Ken’s Lake outside of Moab.  That evening we slept quite well, going to bed before it was totally dark and all squished together under a mountain of sleeping bags and blankets.  It was after all still April and it was supposed to get near freezing over night.  I was in the middle and very cozy and warm.

Before bed we discussed a very important thing, and that was coffee.  We would not be able to make coffee in the morning because our camp stove did not work.  I remembered learning from my good friend Joel on how to make cold brew and we decided that we would try to just make it over night.  So we put coffee grounds and water straight into the coffee pot and let it sit hoping that it would provide us with our necessary caffeine bump in the morning.

Ken’s Lake Campground is also the home of a waterfall.  Faux Falls, you guessed it, are also man made, but still beautiful, and there is a lovely little hike right up to it.  We got up, ate excellent cold brew coffee, ate cold pancakes with peanut butter, and then packed up the camp.  Then we hiked to Faux falls.  I was so glad to finally be doing what I so wanted to do on this trip.  Hiking and exploring in natural places.  We saw a ton of lizards, took lots of pictures next to the falls, and admired many cacti.  It was maybe the best part of the whole trip for me. 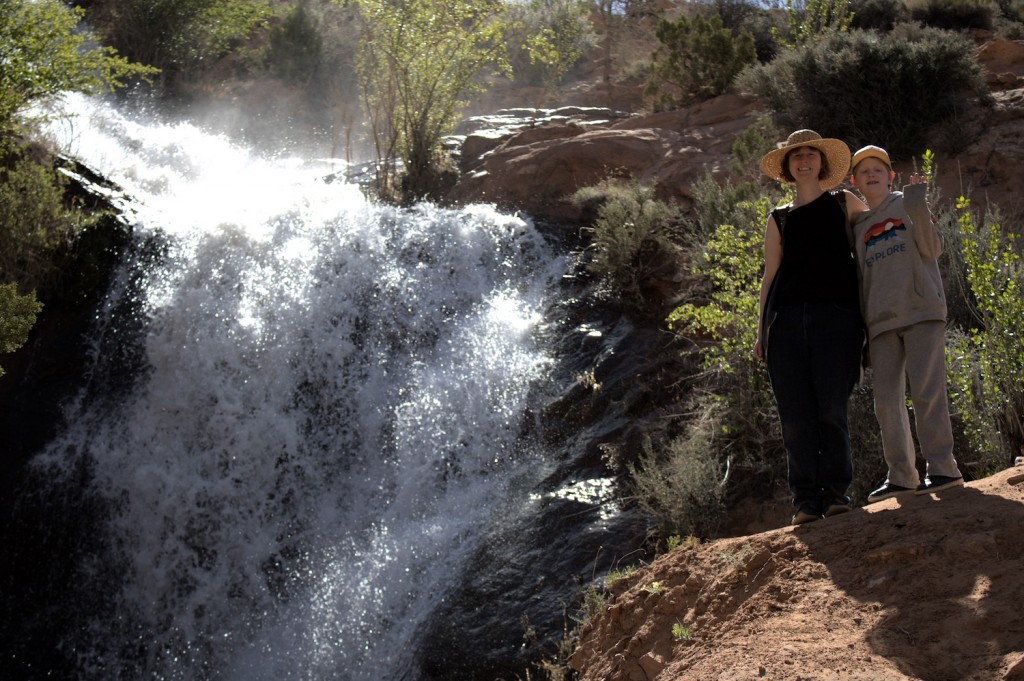 We returned to our packed van and left.  We decided to head south and hope to find either a campsite or a hotel some where on the way to the Grand Canyon.

Our next stop was Wilson Arch.  It was right on the side of the road, and since we didn’t get to go to Arches National Park, like I really wanted to, it was a must stop.  The climb up to it was very steep and pretty difficult. 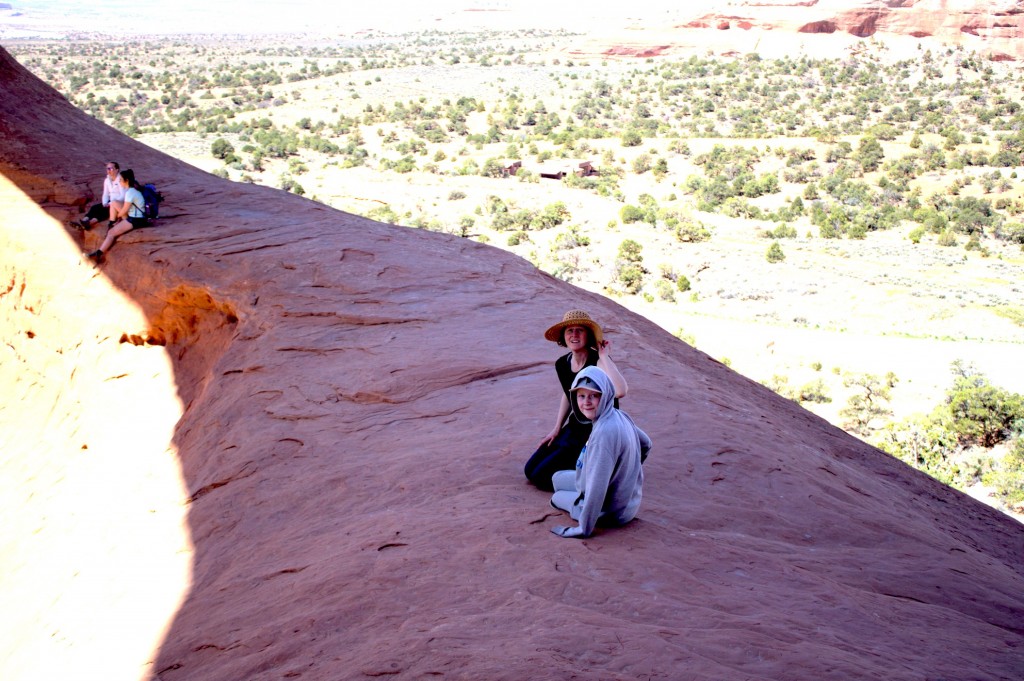 We met a very nice Asian lady who told us all about going to the Four Corners and we told her we were driving south and looking for a campground.  She told us we should go to the Valley of the Gods and that people were camping there.  When a little lady who can barely speak english tell you that you have to go to the Valley of the Gods, you just do that.  In all my traveling years, when someone pops out of nowhere and tells you of a cool place to go and it is basically on your way to where you are going, that is an important stop.  It was only a little off the path we were going to take, so we decided to check it out.  But first we had to find a store to buy a camp stove in.  We found a hardware store in a tiny town.  It was pretty much the life of that little town, and the shelves were just packed with anything a person would need.

The area we were going through was all very out in the middle of nowhere.  The Valley of the Gods was totally amazing and BLM land, so we could have camped there for free had we only brought a bucket.  You have to have your own toilet and since we figured we would mostly end up camping in developed campgrounds we didn’t bring any sort of mobile toilet set up.  While we were out of the van taking pictures Aaron had me jump for a photo, and that is when I fucked up my knee.  Dang it.  Old Lady Katie right here.  It is still fucked up as I write this in June.  My healer (who is osteopath trained) said it was my meniscus, but now some of the muscles out and around my knee are bugging me too.  What a fucking drag, especially since we have some back packing plans for the end of July.  Dad is feeling like it may be his last backpacking trip and so I gotta pull through for this.  But fuck, I just did a little hike up Crazy Canyon the other day and it is still soar two days later.  What is going to happen???  I do not know.  But I will keep working on it. 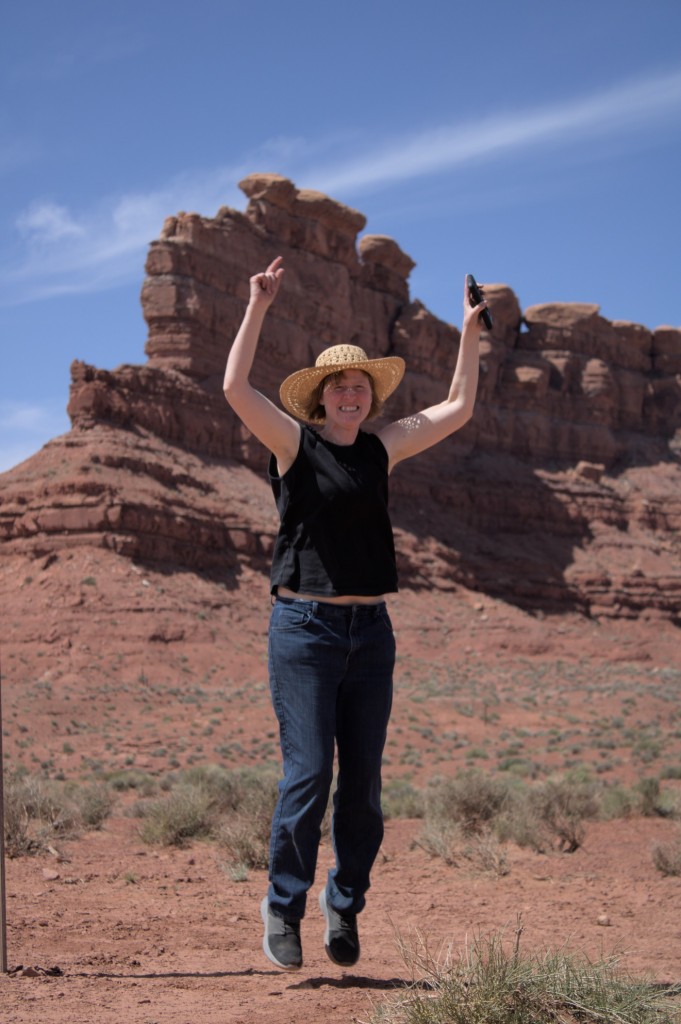 After leaving The Valley of the Gods we entered Navajo Nation and drove through Monument Valley.  Which was one cool rock formation after another, all of it we would have missed had we not listened to the roadside interaction we experienced with the friendly traveling lady.  We decided to get a room at a Hotel in Kayente.   It was a lazy evening of checking email and reading books.

The next day was Grand Canyon Day!!! We kept driving through the Navajo Nation and went through desert land that was the blowing sand kind of desert, it was like being in a blizzard but it was hot and it was sand instead of snow.  The big suck about this was that we don’t have AC.  when the sand would die down we would roll down the windows and then back up again when the wind would pick up.  We stopped at the last big town before entering the park, on the reservation and were like the only white people in there, which was a nice change of things.  We were worried all the prices were going to be astronomical, but they were the same if not cheaper than Missoula.  The anticipation in getting close to our major destination was very overwhelming.  When you enter from the eastern part of the Park, it is very desert like.  And I remember thinking, “When does it turn into a forest?”  The transition was really interesting.  We got into the national park and visited our first overlook and it was still all very desert, but as we drove west the Juniper trees got bigger and thicker and then slowly transitioned into pine trees and then we were in a forest much like the ones we are used to.  It was pretty cool.

The first look at the Grand Canyon was pretty awesome, but what is weird about it, is that it is so epic that it doesn’t seem real.  Like it feels like it is just a painted background in a movie or something.  So weird. 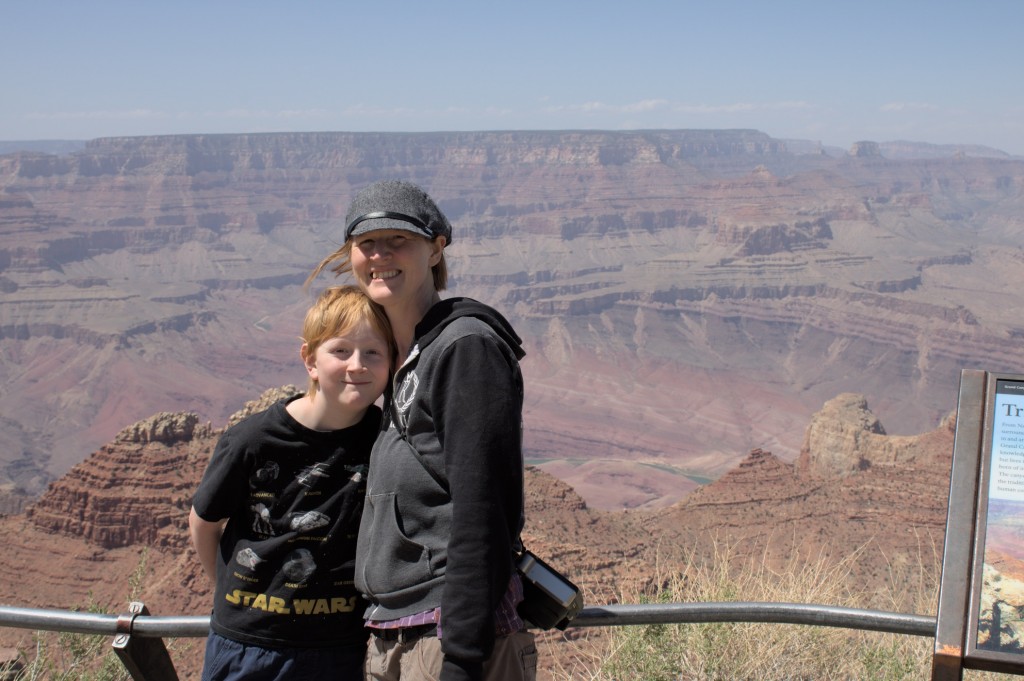 Getting to our campground was so awesome!  It was a perfect little spot.  Jorge went to the bathroom and came running up to me, “Mom! They have flushing toilets!!”  He was very excited about that.  And running water in the bathrooms.

We set up camp and then walked to the grocery store that is there. Fancy.  We got firewood and postcards.  And then we went back to camp and made dinner.  Then we decided that we should walk to the rim and watch the sun set.  My knee was bothering me this whole time which was just really awful.  I had hoped to walk the entire rim trail the next day, but I quickly knew that wasn’t going to happen.

The next day we had airplane reservation for 2pm.  But then they got bumped to 4pm.  So we took the bus over to the section that had the Kolb gallery.  My dad had shared his book about the Kolb family and how cool they were and had really insisted we visit it.  Unfortunately, it was closed.  Aaron and Jorge walked down the trail that is carved into the cliff and I sat and tried to draw the view, which proved to be very difficult.

Next up was the airplane tour.  I had talked to a lot of people about this trip and so many people said that if I was going to go, that I had to do an airplane or helicopter tour.  We let Jorge choose and he chose the airplane, which was good because it was the cheapest.  It was a smaller plane with big windows for viewing.  Unfortunately, I got so sick.  Like I thought I would vomit the entire time sick.  I couldn’t even really enjoy it.  But Aaron and Jorge had a really good time. 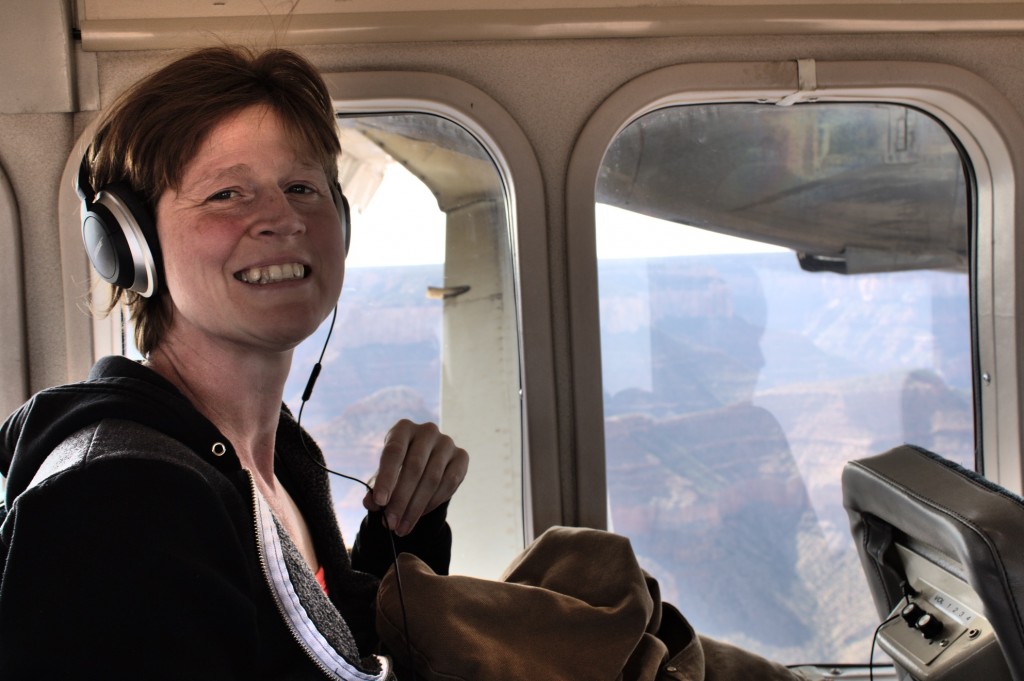 It made me so sick that when we got back to camp I went straight to bed for a few hours and Aaron had to make dinner.  We had a fire that night, which was nice.

The next day it was time to leave!! We packed up camp and stopped at a few overview areas, and then headed to Mystic Hot Springs.   Being on the road again for six hours was no fun.  But the hot springs was very cool.  I was a little disappointed in how expensive it was.  The soaking was not included in the price of the cabin, which really sucked.  And the cabin didn’t have a bathroom which was also disappointing. In general I would not recommend it as a place to stay, and $20 per person to soak, is a little pricey.  But it is a cool place with awesome formations.

The next day we got up super early and did a 12 hour of driving day.  And then we were home.  And really the best part of leaving Montana is always coming back.

I think if I was going to do this trip again, I would have spent more nights at the Grand Canyon.  I would make the whole trip longer, and instead of doing six hour driving days I would’ve done three to four hour days instead.  I am very grateful we went, I think it was an important family thing to do, even though I was miserable for a large part of it.